Posted on January 10, 2013 by Linda Cichanowicz

In light of the recent tragedy in Russia, involving a Zorb-type globe, I felt I needed to post something for our listeners/readers to reassure them that ZORBing is indeed safe.

The ski resort in Russia is not in any way endorsed by ZORB. It is not an official site, it is just run by people who managed to get their hands on a ZORB-type globes and who didn’t bother to take the necessary safety precautions to run it.

ZORB has released an official statement which you can read here.

If you want some reassurance; be sure to check out their site, which lists the ONLY official 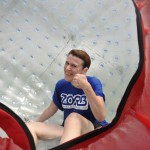 ZORB international sites and also check out our story, you can see in the video and photos some of the safety precautions which every ZORB operator should take. All officially endorsed ZORB operators DO take these precautions.

As with any activity, you do assume some risks, of course…but with ZORB, if I can do it, then just about anyone else can. Be sensible! Only ride at official ZORB sites and if you’re not physically able, then don’t try it!

It’s a shame that such a tragedy occurred, we feel very badly for those involved. We hope that something like this never happens again.

We love ZORB and we do recommend it to our listeners/readers who want to do something fun and exciting, as long as they are physically able and use an official site. There aren’t many of them, but they are worth the trip!