9 Hotels with Stories To Tell

Hotels with stories to tell are treasures of American lodging. I’ve chanced into some and sought others out. I’ve seen some at their peaks after multi-million dollar renovations, and I’ve experienced some during periods of decline, but every stay was special. Here’s a small collection. One traces its roots to George Washington’s era.

Loews Don CeSar Beach Hotel – The elegant Pink Palace in St. Petersburg Beach was 300 percent over budget when it opened in 1928. Spring training checks from the New York

Yankees helped it survive the Great Depression, and the military took it over for a World War II hospital. After that, it housed Veterans Administration offices, but even that didn’t last. It was derelict hulk on the beach when it was bought for – get this – only $460,000 and revived with a $7.5 million renovation in 1973.

The Hermitage Hotel – This Nashville landmark opened in 1910 and is famous for many reasons, not the least of which is an Art Deco men’s restroom that women clamor to see. 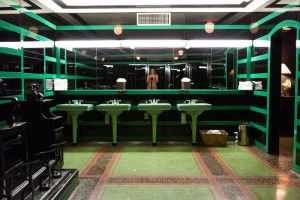 It’s had many ups and downs and has been on an up for several years now. WSM-AM (the station of the Grand Ole Opry) used to broadcast performances of the Francis Craig Orchestra, which introduced Dinah Shore to appreciative audiences.  Oh, and Minnesota Fats lived here for years. (Personal note: The police were called to my after-prom party here.)

The Brown Hotel – This Louisville classic had a grand run as a society destination, a sanctuary for hundreds during the huge 1937 Ohio River flood and the namesake of the culinary classic Hot Brown sandwich. (You can start an argument about the proper way to make a Hot Brown today.) Actor Victor Mature was an elevator operator here, Rowan and Martin used to play the Bluegrass Room and there’s a suite of Muhammad Ali memorabilia. Also in its history is a period of non-hotel operation when the building housed the local board of education.

The Roosevelt Hotel – This midtown Manhattan gem is de classe to some hipsters, but they’ll never understand the importance of the three-decade tenure of Guy Lombardo and his orchestra here. While they’ll also not appreciate that Lawrence Welk was Lombardo’s summer fill-in, they might appreciate that it was incorporated into episodes of TV’s “Mad Men.” It’s named for Teddy Roosevelt and is known, quite appropriately, as the “Grand Dame of Madison Avenue.” (Personal note: I was at the Roosevelt to read the screaming New York Post headlines about the start of the Iraq War.) 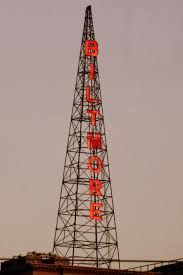 this huge 1924-vintage structure in the 1970s as it is today, but the Biltmore still was a star. It was always easy to find because of the lighted Biltmore signs on two radio masts that once broadcast the signal of radio station WSB-AM. It’s now offices and condos.

The Omni Homestead Resort – How could you not be impressed by a hotel whose history dates to 1766? The hot springs of Virginia’s Allegheny Mountains had appeal even in colonial times. The modern resort has roots in the 1880s, and golf is central to its fame. The Old Course was built in 1892, and its first tee is the oldest tee in continuous use in the U.S. When World War II erupted, Japanese diplomats cooled their heels here for a while. 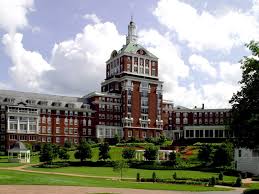 The Omni Shoreham Hotel – Washingtonians always will always recall the Shoreham for laughter. It was the performance home of political comedian Mark Russell and the comedy troupe the Capitol Steps for years. Before then, Franklin Roosevelt had his first inaugural ball here, and President Harry Truman often participated in all-night poker games in the apartment suite of Stuart Symington. (Personal note: The Shoreham may be the first place I bought my father a cocktail.) 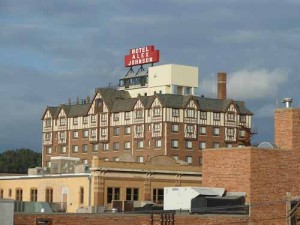 in the script several times, and Hitchcock, Cary Grant and Eva Marie Saint stayed here during filming at Mt. Rushmore, only about a half-hour away. It’s a big building by Rapid City standards and easy to find. It’s another product of the 1920s and a place patronized by six U.S. presidents, starting with the taciturn Calvin Coolidge. Work started on the hotel on Aug. 19, 1927, the day before chiseling began on Mt. Rushmore. (Personal note: Just one street over from the AJ is Dakota Angler, source of information about trout streams in the Black Hills.)