LAFAYETTE, La. – I’d never walk a mile for a camel, but I did ride a bicycle 30 miles for a crawfish one time.

(If you’re too young for the camel reference, it recalls a cigarette advertising slogan. See a 1969 TV commercial here.)

Actually, my ride was for a whole load of crawfish, shrimp and boudin when friends gave me a taste of Cycle Zydeco, a rolling four-day bicycle party that meanders for about 200 miles through Louisiana’s Cajun country. 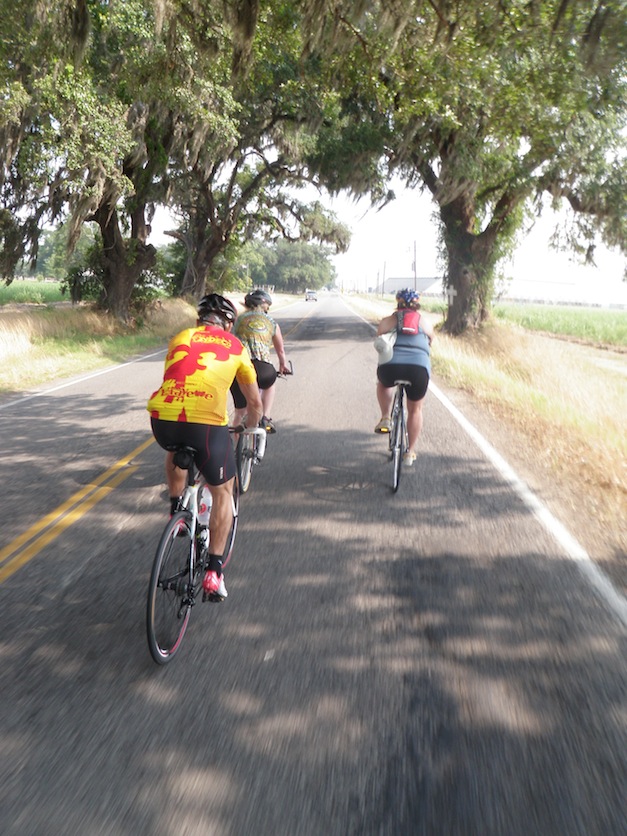 Escorts and experts for my one-day adventure were Roy, Leroy and Tad (a crawfish farmer, an oil drilling equipment supplier and a BMW service rep). They were serious cyclists and great representatives for a ride that brings upwards of 700 riders to this French-accented territory every April.

Lafayette is the hub city of Acadiana, and Cycle Zydeco winds through several parishes around Lafayette to deliver a full dose of Cajun culture – and that means music, crawfish, boudin, dancing and beer.

(An aside about boudin: Boudin is a Cajun sausage whose main ingredients are pork and rice, but with variations aplenty after those basics. One thing I learned is that asking two locals where to find the best boudin almost always produces a dispute. It’s like asking people in other southern states what’s the best barbeque joint nearby.) 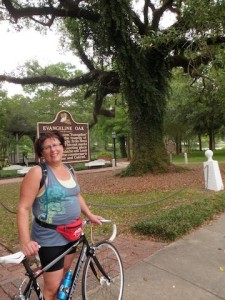 My Cycle Zydeco sampler started at the Evangeline Oak in St. Martinville, a storied place in American literature.

Poet William Wadsworth Longfellow immortalized this massive live oak in “Evangeline,” his story-poem about the exile of French-speaking colonists in Nova Scotia in the 1700s and their eventual relocation to south Louisiana.

Without that colonial-era exile, of course, the distinctive Cajun culture that now is so appealing wouldn’t exist. Today’s visitors are beneficiaries of a centuries-ago trauma.

The shaded streets of St. Martinville soon gave way to sunny backroads that tracked past fields of sugar cane and country homes. Occasionally, staccato vibrations interrupted the hum of rubber on asphalt as we rode across the metal grates of bridges over Bayou Teche. 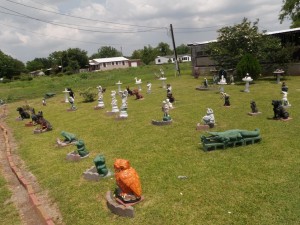 As we rolled toward Breaux Bridge, the self-proclaimed “Crawfish Capital of the World,” we passed the best yard art display I’ve ever seen.

A homeowner had assembled a ceramic menagerie of alligators, an owl, a bear holding up a trout, a Labrador retriever, a German shepherd, a bulldog, a swan and much more. Oh, and don’t forget the angels. They somehow didn’t seem out of place at all.

My thoughts turned to aquatic critters when I saw the biggest painting of a crawfish I’ve ever seen atop the water tower in Breaux Bridge.  Lunch was close, but dancing came first.

As we wheeled into town, the infectious sound of a Cajun band spilled into the street from Café Des Amis. It was mid-morning on a Saturday, and the place was full of people who had come to eat breakfast and to dance, dance, dance. Oh, and the bar was open, too.

An accordion-accented Cajun band almost always occupies the resturant’s stage, and the dance floor stays busy. Oh, and the bar is open, too.

Just like the real Cycle Zydeco, I stopped at McGee’s Landing in Henderson. I pushed my bike over the levee to peer into the expanse of the Atchafalaya Swamp, home to many alligators and untold numbers of crawfish. 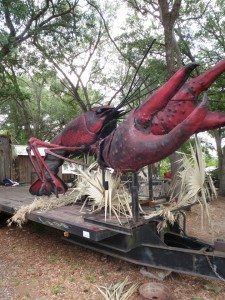 My ride was only a sampler, however. The real deal offers daily rides of from 36 to 45 miles (longer distances if you want), roadside support, places to camp after each day’s ride, showers, music and camaraderie. Oh, and you’ll find plenty of bars that are open.

If you don’t want to camp, there are shuttles each day to and from hotels in Lafayette and other towns.

In between the start and the end in Lafayette are St. Martinville, Breaux Bridge, Arnaudville, Opelousas, Mamou and Eunice.

The 2014 ride coincides with the Festival International de Louisane, one of the best music festivals in the world, and the Etouffee Festival in Arnaudville, broadening your entertainment and dining experiences.

Cycle Zydeco is a project of TRAIL (Transportation Recreation Alternatives in Louisiana) in concert with various tourism authorities in Acadiana, including Lafayette. 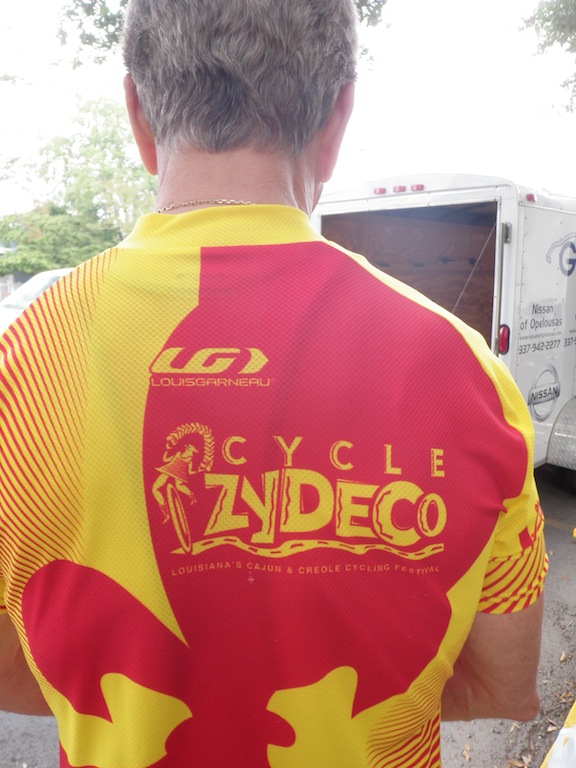