Ambience? No! Great barbecue? You bet!

HUNTSVILLE, Ala. – Melvin’s Place of BBQ isn’t somewhere you’d take a first date – unless your date knows how to appreciate the finer aspects of culinary life here in the Barbecue Belt. 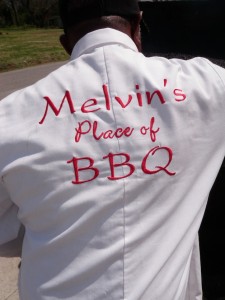 There’s no sign on the building, but there is on Melvin’s back. (Photo: Tom Adkinson)

What now is Melvin’s Place of BBQ for years was Melvin’s Auto Repair at the corner of Hall Avenue and Cemetery Street.

The cemetery for which Cemetery Street is named is directly across the street. A blue and white singlewide mobile home that now is a taxi company’s office is within sight just around the corner. An automobile upholstery show is next door.

Let’s just say the curb appeal is underwhelming, assuming you can find the joint in the first place. There’s no sign outside to tell you this is smoked meat heaven.

The giveaway that you’ve found Melvin’s Place of BBQ is the hulking commercial smoker mounted on a trailer. The smoker sits at the corner of a concrete slab, and behind it are a couple of umbrella-covered tables closer to the red and white former repair shop for outdoors dining. 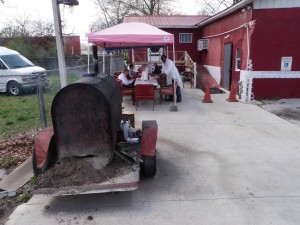 If you eat indoors, the space has the casual look of a fraternity house rec room, but cleaner.

The tantalizing smoke that wafts from the smoker confirms you’ve hit the jackpot.

Melvin Rogers is about as nice and friendly a guy as you’d ever want to meet. The fact he’s a pitmaster just adds to his appeal.

He’s tall, solid around the middle and has a bit of a gray beard. He knows how to tend a fire, be patient with meat and make friends.

He’s proud of what comes out of his smoker, too, and doesn’t bother with a menu unless asked. Fancy restaurants might say their professional waiters deliver their menus orally; Melvin just visits with you.

Melvin: “What’ll you have today?” he said as a friend and I eased into chairs that once might have been part of a dining room set but now do duty outdoors.

Melvin: “Pulled pork, ribs and chicken. You’d like the chicken.”

Us: “One pulled pork plate and one rib plate.”

Melvin: “Sure you don’t want some chicken? It’s really good. I’ll bring you some chicken, too.” 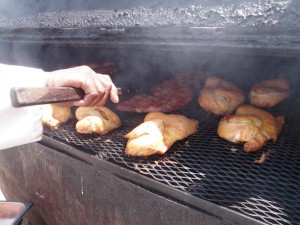 Presentation never is important at a real barbecue establishment, so it doesn’t matter that lunch comes in Styrofoam clamshells and that the only beverages are Pepsi, Mountain Dew and bottled water.

We opened the clamshells and found that Melvin is generous with his portions. Leftovers were in our future.

Moments later, Melvin returned with fall-off-the-bone chicken, which he made us taste right then.

Melvin: “Yep, but now try it with some of this special chicken sauce I made.”

Melvin says he’s been making barbecue for “20 years, maybe 25 years,” but he opened Melvin’s Place of BBQ only a couple of years ago.

“I got older and got tired of lifting motors and transmissions,” he said about his career change. 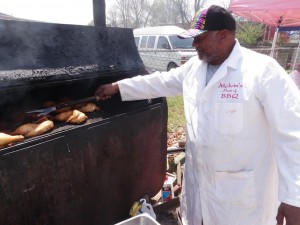 You’ll find Melvin laboring over the smoker most days – sometimes seven days a week – unless he has a musical gig.

You see, Melvin’s into quartet singing, too, and if his singing is anywhere near as good as his barbecue making, he probably ought to produce a few CDs to sell along with his pulled pork, ribs and chicken.

(Special note: Prices are modest, and payment is cash only. If you want a receipt, you’re likely to get it handwritten from Melvin on the back of a photocopied menu that carries this slogan: “Come see what the fuss is about!!!”