Not One Darn Fish! (But I Had a Great Time) 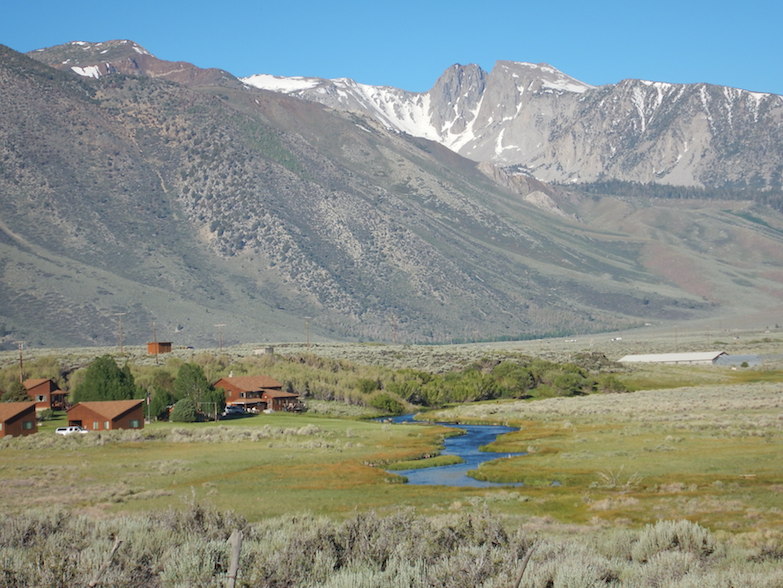 It’s totally counterintuitive, but that’s still my assessment of three days on Hot Creek and the upper stretches of the Owens River just outside the resort village of Mammoth Lakes, California, the community that’s the capital of a massive, multi-sport outdoor recreational area in the Eastern Sierra.

The scenery alone was enough to stop me in my tracks, but I wanted to meet a trout. 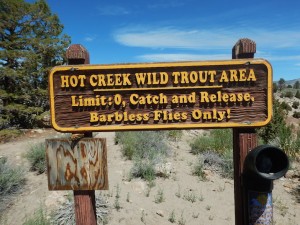 And no wading, either, in Hot Creek. (Photo: Tom Adkinson)

There was promise at the start standing beside Hot Creek. Good stream flow, an excellent trout guide, blue sky. I was with two others. One of them – a total novice – hooked a hefty brown trout while our guide was giving her the most basic fly rod instruction. Of course, she didn’t know how to play the fish and didn’t land it, but that episode was within minutes of arrival.

“This is going to be great,” I declared out loud, but that was not to be.

Three days and hundreds, maybe thousands, of casts later, the scorecard showed a big, fat zero, and I had no images of a 20-inch rainbow or brown trout to show off back home in Tennessee. Zero, zilch, nada, nothing, strikeout, goose egg.

It’s usually a sad situation when all you can say is that you got a couple of half-hearted strikes.

This, however, was far from sad. The setting in the Eastern Sierra was so stunning, and so absolutely alien to me, that I wasn’t totally bummed out by not catching any trout. It was easy to paraphrase Dorothy from “The Wizard of Oz” by saying, “Toto, I’ve got a feeling we’re not in Tennessee anymore.”

Hot Creek and the Owens River are modestly sized streams that in places flow through sprawling meadows that collide with snow-capped mountains. In one direction are the Glass Mountains, and in another other are the Eastern Sierra.

Mammoth Mountain in the Eastern Sierra tops out at 11,053 feet, and the streams are at about 7,000 feet. It’s almost a challenge to pay attention to the water when the landscape is so beautiful.

Hot Creek adds some extra visuals by sliding into a narrow canyon. It’s a serious downhill hike to get to the supposedly trout-laden water. 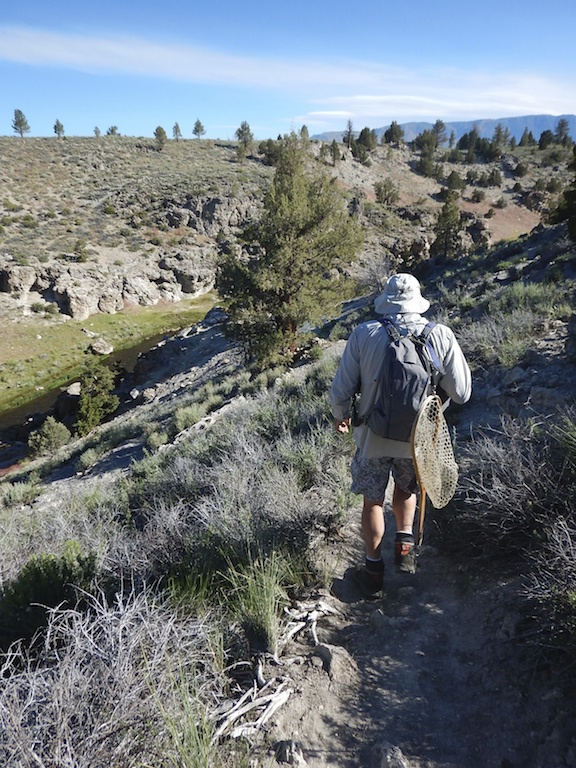 When Hot Creek drops into a canyon, it’s a steep walk to the water. (Photo: Tom Adkinson)

I really don’t doubt trout guide Scott Flint, who said stream surveys indicate 7,200 fish per mile of Hot Creek. Flint leads the guide service at the Troutfitter in Mammoth Lakes and has been fishing Hot Creek, the Owens River and other area streams and alpine lakes since 1990, so he knows his stuff. 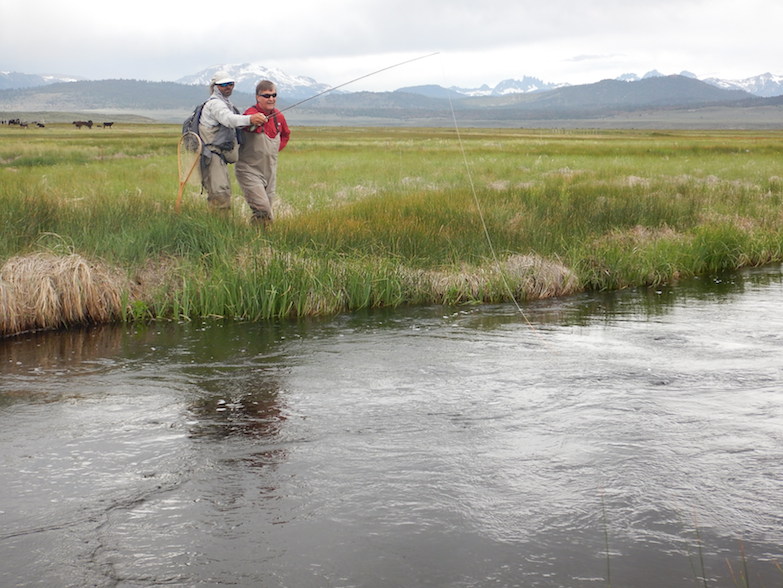 He kept my expectations low from the start, although he was confident my friends and I would catch fish.

“Realize this,” he said. “This the most sophisticated fishing in the world. These fish are wary. The saying here is that the fish have PhDs.”

I recited another fisherman’s saying to him as we parted:  “That’s why they call it ‘fishing,’ not ‘catching.’”

Information about all the calorie-burning activities in the area is available from VisitMammoth.com. Mammoth Lakes is south of Yosemite National Park and about three hours from Reno, Nevada, and five hours from Los Angeles.