Tai Chi for Me? Surely, You Jest 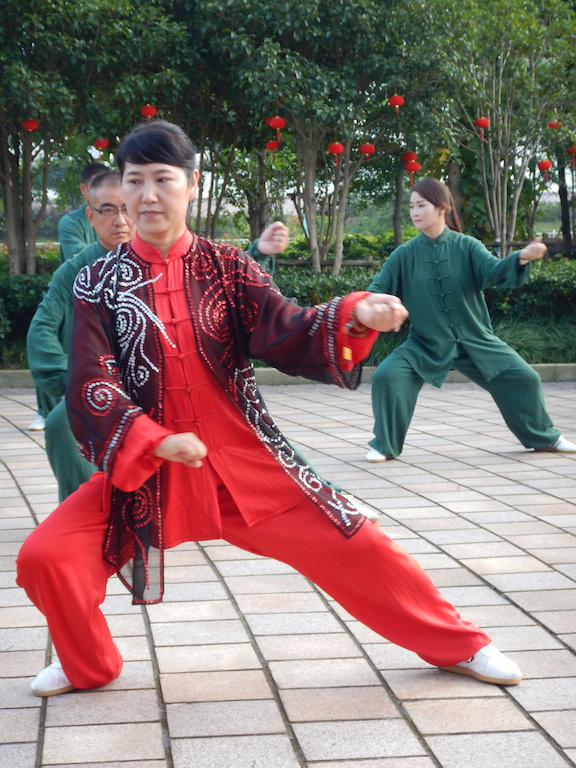 Tom Smothers: I see by your outfit that you can do tai chi.

Dickie Smothers: I see by your outfit that you do tai chi, too.

Both: If you get an outfit, you can do some tai chi, too.

WENZHOU, China — I should have known better than to sign up for the tai chi lesson.

I’m living proof that white guys can’t dance. At 6 foot 4 inches tall and packing a Medicare card, I have the wingspan of a pterodactyl and move with the grace of a wounded stork.

At least I wasn’t alone. Fifty or more fellow conventioneers had dragged out of bed at 7 a.m. and donned gleaming white tai chi uniforms that our convention hosts in Wenzhou, China, had loaned us. 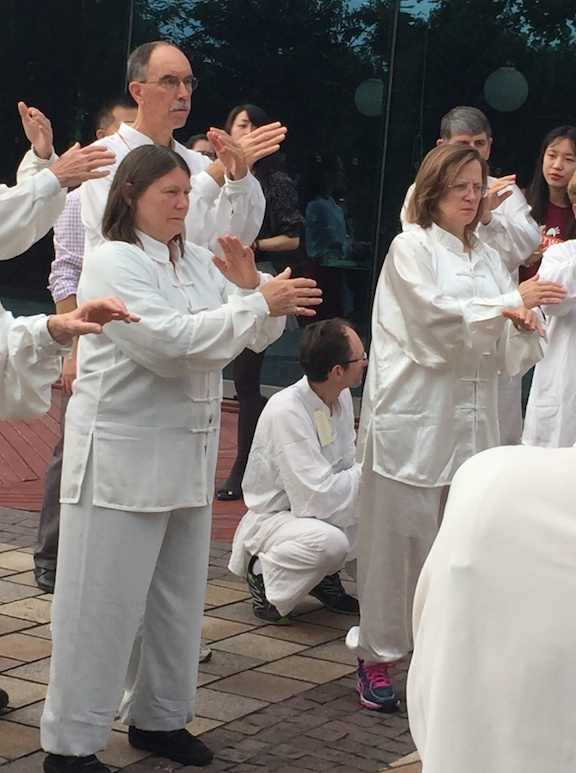 We assembled in a garden patio outside the Shangri-La Hotel along the Ou River, pointing and laughing at each other – some more nervously than others. The lithe and more graceful among us projected an aura of confidence. I didn’t.

It was clear on which end of the tai chi bell curve of competence I belonged.

Our chatter and selfie-taking ended abruptly when the master teacher and her troupe of fellow exercisers called for order. She looked regal in an embroidered jacket that complemented her bright red tunic and pants. Her followers wore dark green.

The tai chi team spoke no English, but interpreters barely needed to tell us to shut up, watch, and admire a demonstration by the master and her group. They moved in unison to the tinny sound coming from portable speakers. They glided like waves on an ocean, flowing back and forth, in and out, smoothly and gently. It looked so easy. It proved so difficult.

We formed rows and lines, much like a high school marching band or a corps of tentative ROTC cadets trying to learn close-order drill moves, but without a band director with a bullhorn or a glaring drill sergeant to maintain order. 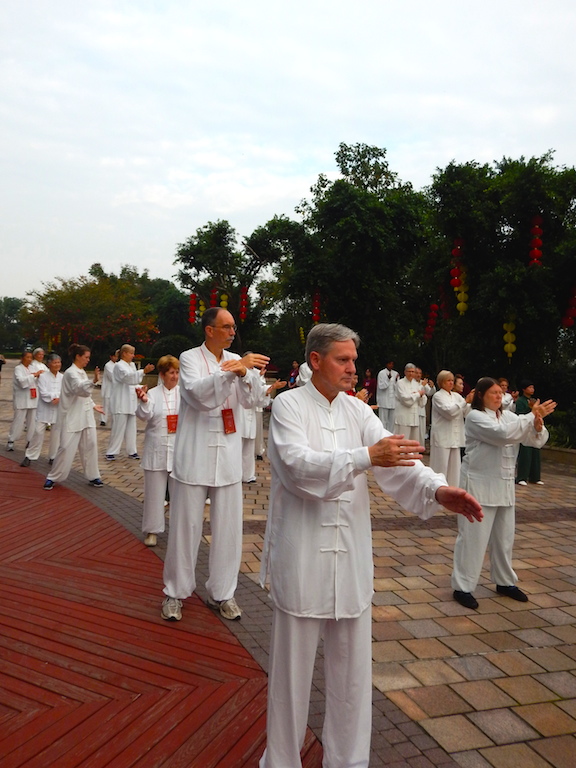 Rows and lines — like marching band or ROTC drill.

My uniform was size 4X. If there had been a breeze, my tunic would have billowed like a sail, and I might have moved more gracefully. At least the sleeves were long enough.

I labored to follow the leader. Her arms were making semi-circles and going clockwise, so why were mine going counterclockwise? Why did I move left when she moved right? Why does she look so comfortable while I feel like I’m in the fourth quarter of a tight basketball game?

In fact, I couldn’t help thinking about long-ago basketball drills. I was in a defensive crouch, but the goal was to relax, not to execute quick moves and achieve maximum reach. I felt awkward, but the music was soothing, and I didn’t see a coach ready to rent the calm morning air with a blast on his whistle.

Suddenly, I felt a hand on my back. One of the green-uniformed helpers had come out of nowhere. He placed his other hand on my abdomen and adjusted my posture – with authority. Apparently, my basketball crouch wasn’t proper tai chi form. 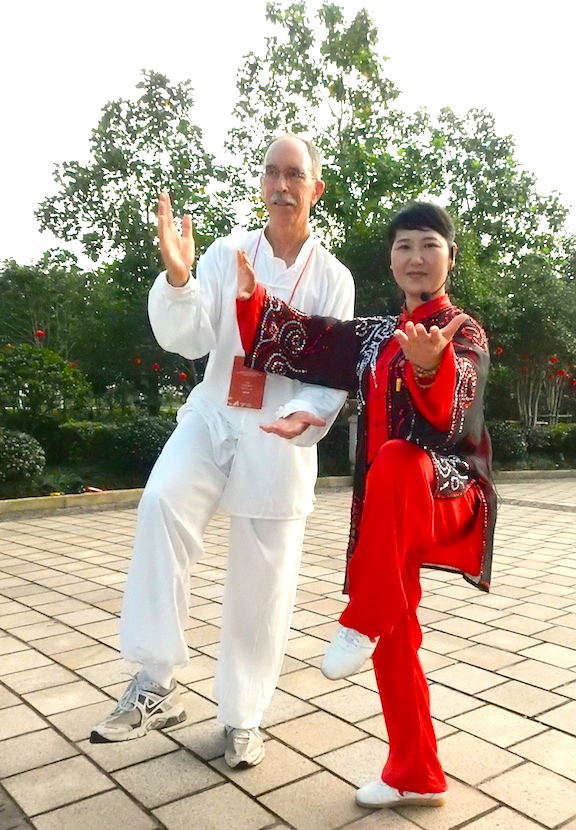 The master instructor smiled sweetly – except when she grimaced with pain – as she watched her neophyte students make a mockery of her ancient art.

She wrapped the session up with a translated pep talk.

“If you do this at home just 20 minutes each morning for only three months, I promise you will get better and feel better,” she said.

Too bad my gleaming white size 4X tai chi outfit was a loaner. 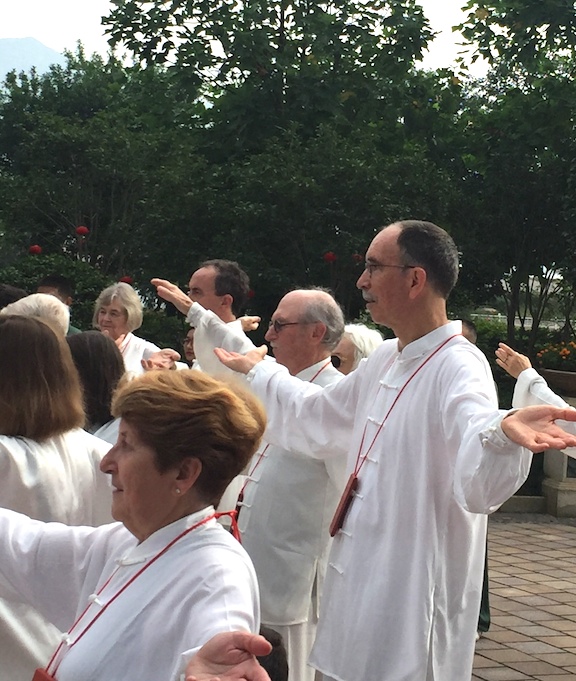 The wingspan of a pterodactyl and the grace of a wounded stork.

This entry was posted in Uncategorized. Bookmark the permalink.