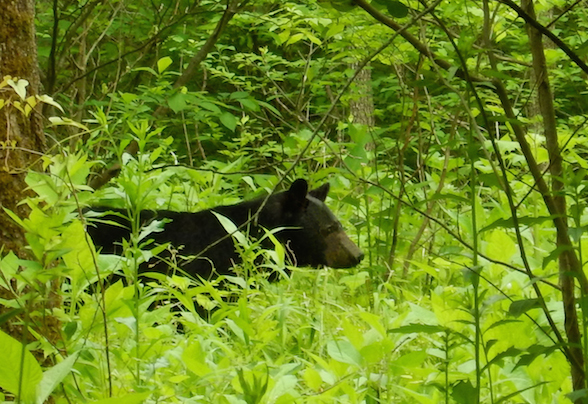 This bear wandered off before I had a chance to say, “Boo!” I promise. (Photo: Tom Adkinson)

GREAT SMOKY MOUNTAINS NATIONAL PARK — Bill Stiver, a wildlife biologist at Great Smoky Mountains National Park, wants me to do something that goes against every outdoor-loving fiber of my body. If I’m lucky enough to see a black bear, the symbol of America’s most visited national park, he’d appreciate it if I would make a ruckus, startle the bear and make it run away into the woods.

“Can’t I take a picture first?” I implored.

He smiled, didn’t answer directly and repeated what he said earlier about making a big noise.

Stiver, of course, was being theatrical – I think – but his point was clear. He doesn’t want bears to associate humans with anything good, even benign neglect. He wants bears to go the other way when they see a human.

The problem isn’t the bears. It’s the humans who aren’t smart enough, or respectful enough, to keep their distance from bears and understand that they are guests in the bears’ home, not that the bears are there for their amusement, photographic or otherwise.

Stiver explained that the absolute worst thing a human can do is try to feed bears or to leave human food or trash where bears can get to it. That’s especially important in campgrounds and at backcountry campsites in the park and at the vacation cabins that are near the park’s boundary.

“The saying is true that ‘a fed bear is a dead bear’,” Stiver said, explaining that bears that associate humans with food are a danger and that he has successfully lured a nuisance bear into a trap using a single M&M as the bait. Stiver and other wildlife professionals will trap and relocate nuisance bears, but if they continue to return to where they interact with humans, euthanizing them can be the result.

Great Smoky Mountains National Park is home to about 1,500 bears spread throughout its 522,000 acres in Tennessee and North Carolina. Even under normal circumstances, your odds of seeing one are slim, and you won’t have much opportunity to be a noisy visitor or to take a photo anyway.