Celebrating on the Watauga River 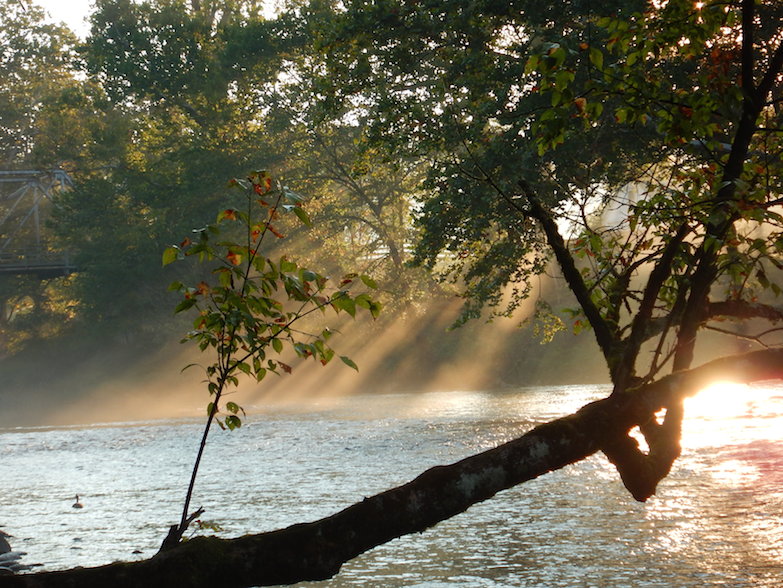 The Watauga River rises on Grandfather Mountain in North Carolina and gets interrupted by two Tennessee Valley Authority Dams in Tennessee. About 78 miles from its headwaters, it flows into the Boone Lake impoundment of the South Holston River, and a stretch of water below the second TVA dam at Elizabethton, Tennessee, attracts fishermen from around the world.

My Watauga introduction was one of celebration – the combination of a friend’s birthday and retirement and my own retirement. We had joked about “fishing on Wednesday if we wanted,” and now we could.

TVA controls the flow and is conscious of river levels, both for fishermen and rafters. The Watauga is ideal for driftboats, and there are some stretches where wading is practical. 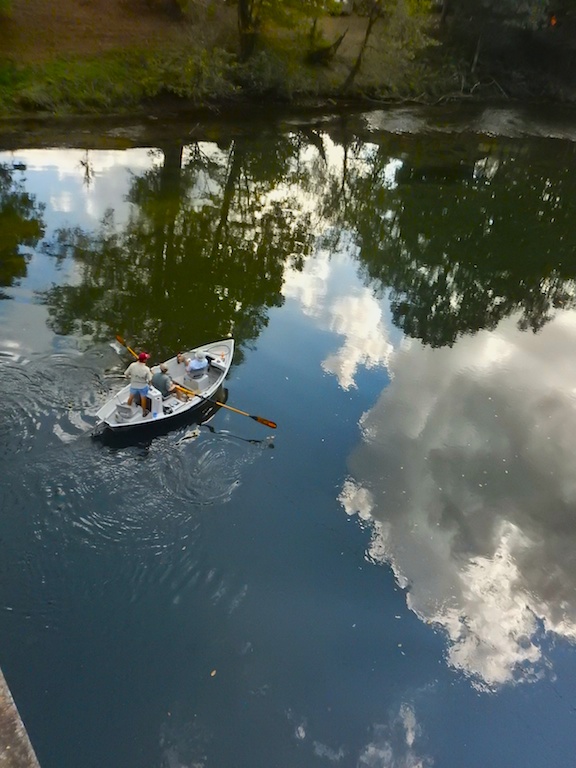 The Watauga, whose flow is controlled by a TVA dam, is ideal for driftboat fishing.          Photo (c) Tom Adkinson

Our trip was a driftboat day with Jason Reep of East Tennessee Fly Fishing. He’s easy to spot on the river. His Stealthcraft driftboat, which he calls the Cadillac of driftboats, has a brown trout paint job. Reep said he was one of the first three or four guides on the Watauga back in the early 1990s.

“There are close to 15 full-timers now, and about a thousand on weekends,” he said with a wink. They all work the Watauga and the South Holston, which is only about 45 minutes away. Reep also offers wading trips on smaller streams in Tennessee, North Carolina and Virginia.

Our float with Reep was an easy trip of about five miles, starting at Hunter Bridge in Elizabethton and ending at Lovers Lane. Along the way, the Doe River flows into the Watauga, but it doesn’t appreciably change the stream’s size. Below our takeout is a 2.6-mile “Quality Trout Zone,” where the TWRA enforces a possession limit of two fish 14 inches or longer caught on artificial lures. 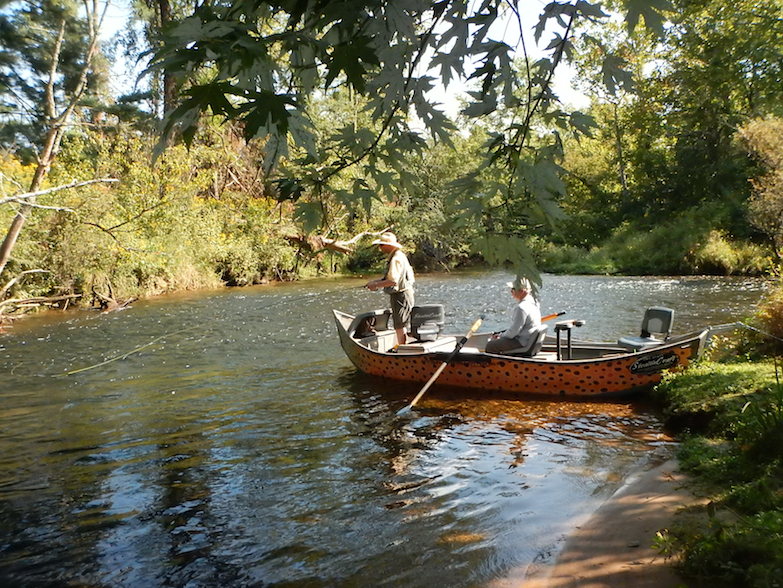 Because the Watauga is a tailwaters river, it’s fishable all year, although Reep says volume drops after Thanksgiving, only to revive as warm spring days come along.

Reep enjoys the river’s beauty and recalls one client from England, who was overwhelmed.

“He couldn’t believe that just anybody could buy a license and go fish on a river,” Reep said.

Scuds and midges predominate in the stretch between Wilbur Dam and the Doe River confluence, and the insect variety increases below the confluence, with more caddis, mayflies and even a few stoneflies, according to Reep.

“Blue wing olives are around from spring almost through Thanksgiving, and there’s usually a big caddis hatch around Mother’s Day. You can barely open your mouth without eating a caddis fly then,” he said. 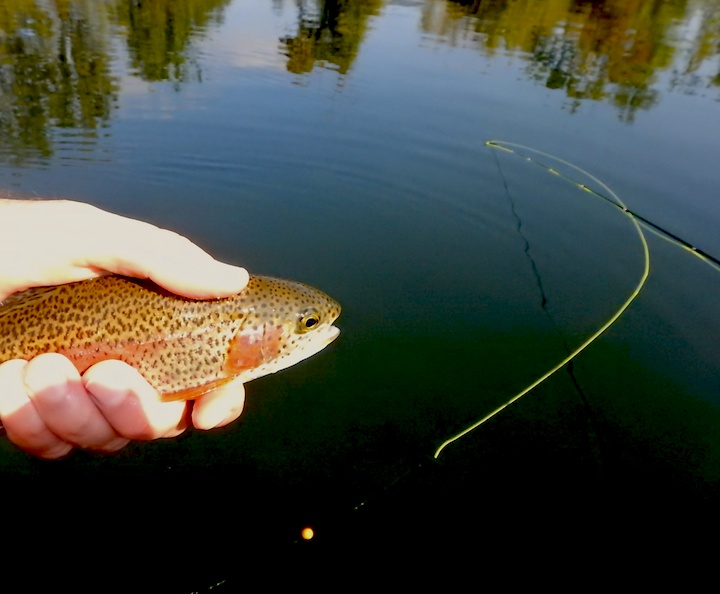 A small brown trout pulled from the Watauga is about to return to grow bigger and excite future fishermen. Photo (c) Tom Adkinson

Reep had rigged 10-foot, 3-weight Syndicate rods with #18 and #20 scuds for us. My norm is a showy #12 dry fly as an indicator and a #10 or #12 beadhead nymph for small streams in the Great Smoky Mountains, so Reep’s flies looked too tiny to be logical.

They didn’t look that way to the numerous brown and rainbow trout we caught fairly consistently. We certainly would have caught even more had we been as attuned to strikes as Reep was. He patiently told us to react more quickly.

“A two-inch fingerling or a 20-inch trophy can present the same strike,” he observed.

As pretty and as healthy as the Watauga is now, it has a dark history. For decades, much of the Watauga was dead – really dead – because of industrial pollution, primarily from a rayon plant and a nylon plant in Elizabethton.

David McKinney, now TWRA’s chief of environmental services, was with the Tennessee Department of Health and Environment’s Division of Water Pollution Control in the 1980s. He paints a grim picture of the Watauga below those two plants that dated to the 1920s and 1930s and were significant to the war effort of the 1940s, but were gross polluters.

“Long before (serious) pollution controls, the river was devoid of all life,” McKinney said.

The cleanup effort proved to be a watershed moment (pun intended). Instead of the prevailing theory of simply reducing the volume of pollutants in a river, the idea of neutralizing the pollutants’ toxicity was suggested. 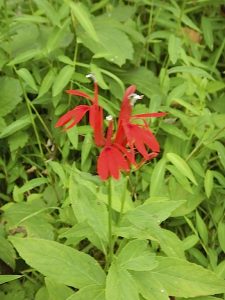 A cardinal flower proves that trout are not the only source of color along the Watauga River.           Photo (c) Tom Adkinson

“When the toxicity was removed, the river immediately began to recover. The benthic community took off. Once there were insects, the trout thrive,” he said.

“I remember when the first fish were put out. A year later, we electroshocked with no expectation of success. Not only had the trout survived, they had thrived,” McKinney said, calling the effort one of Tennessee’s greatest environmental success stories.

TWRA stocks about 40,000 rainbows a year from March through September. There are good numbers of holdovers among the rainbows, and the holdovers begin to take on characteristics of wild trout. Browns naturally reproduce in the Watauga.

Reep, whose wife had shuttled his vehicle to the takeout point while we were enjoying the river and who does the same for other fishermen, said he was disappointed we didn’t catch a true bragging-size fish.

We weren’t. We were too busy celebrating the fact we were fishing on a Wednesday. 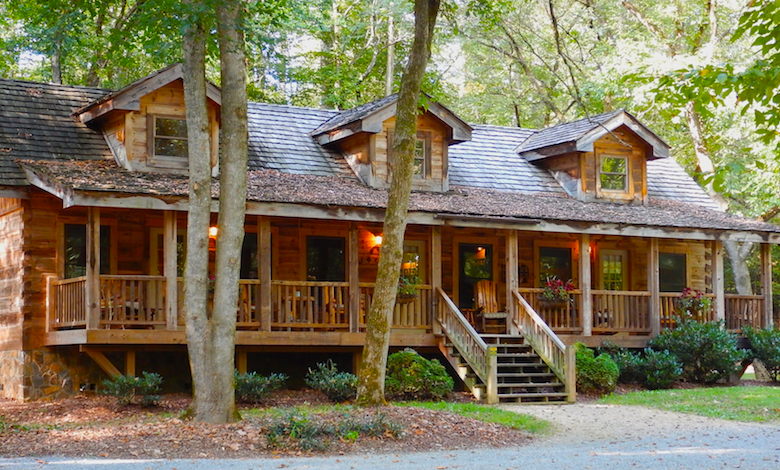