The sky’s were slightly overcast as we pulled up from our two hour drive from the resort to the dark seaside, but the air was comfortable and warm. The first thing I noticed was the lack of “sea smell” from the ocean, but the sight of the crashing waves on the rough rocky cliffs was very familiar. I rushed immediately to the first thing that caught my eye & that was the bright yellow sea grass and the almost flourescent green broadleaf vines that grew over the dark lava rock. 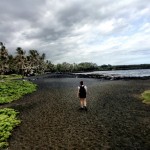 I simply adored the large lava rock flow that spilled into the water. In between the solidified outpouring of laced pumice, I saw a small cove of black sand and wandered over to dig my fingers into its warm depths. The lack of silt made the nearly powder-fine gravel slip between my fingers. Even the oceans water could not be held down by the black sand like the ordinary coral sands of my native Florida.

I found the sands to be both breathtaking and soothing and took my time to experience all the different variations of black sand, from the solid, wave scored cliffs to the handfuls of dime-sized pebbles to the fine sand of the wide beach. 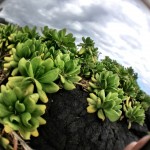 The actual park is about the size of two football fields (as far as I was able to traverse), but the sight is worth the trip if you like to commune with nature and see its natural wonders. The green sea turtles make these beaches a resting pit stop and after feeling the softness of its sandy tide pools, I can understand why. The life guards were there in case any tourists wanted to take a dip from shore, but I would vouch that they were there more to watch over the endangered turtles, whom which we had to remain 15 feet away from at all times, 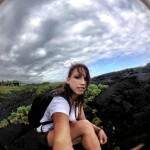 and we were watched by these lifeguards like hawks. The crabs were rambunctious and flitting about the sea mussels and abalone, and the birds awaited the rare absence of tourists so they could continue the crustatean hunt. Life was all around.

All in all, it’s a beautiful sight on the black sand beaches and you get a feeling of contentment by being in the middle of it’s incredible wonder…and you should visit…if you like nature and all. 😉

This entry was posted in Nicki's Blog Main. Bookmark the permalink.