We had the pleasure of being hosted by Eddie Aikau Restaurant & Surf Museum for a gourmet meal which will not soon be forgotten.

A little background on this very special find on the Big Island. The real Eddie Aikau is a true local hero. Eddie was someone who had great respect for the ocean, but also had no fear and was willing to jump in with both feet at all times. He was the first lifeguard to work the beaches and in his seven years he never lost a soul. He also went on to win awards for his surfing ability.

Having satisfied his big wave goals, Eddie answered a personal calling to connect more deeply with his Hawaiian culture joining the Hawaiian voyaging canoe Hōkūle‘a.  Hōkūle‘a set sail March 16, 1978, on what would be an ill-fated voyage from Hawai‘i to Tahiti. Capsized in rough seas, Eddie insisted upon paddling to Lāna‘i for help, some 19 miles away. Although the crew was later rescued, Eddie was never seen again.

As a tribute to Eddie, Linda Gillette and husband Solomon Aikau, Eddie’s brother.  Residents of Hawai‘i Island, and members of the Eddie Aikau Foundation, opened this restaurant and museum.

Chef Scott Lutey, who also has won many awards for his culinary skills and has worked many other top restaurants in the area, heads up the team in Eddie’s kitchen, but tonight’s meal, sous chef Andrew Lorenzo and his team prepared a delicious tasting for us on our visit. 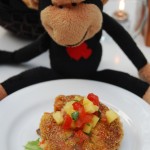 We first enjoyed Kona lobster & crab cake (3 of us) and for Willem a Macadamia-embraced herb garlic goat cheese with Waimea greens, 12-year-old balsamic, and local strawberries. I loved both! Being a seafood crazed woman, I really enjoyed my lobster & crab cake, but honestly, I wanted MORE of the Macadamia goat cheese, it was absolutely delicious!  We then were all served a plate of seared ahi served rare, with Wow tomato, Nakano cucumber, preserved lemon vinaigrette, tobiko it was wonderful! Willem was served a kalua pork slider as his appetizer. Then we moved on to our salad (I was already just about 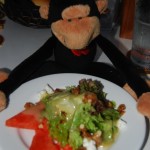 full!)Watermelon Salad – Waimea greens, watermelon, candied macadamia nuts, goat cheese, ʻōhiʻa honey vinaigrette. This was a very tasty combination of flavours, nothing like any salad I had ever had before. As you can see, Maurice was trying very hard to enjoy my meal! Ooohhhh and then the main course. All I can think is NOM NOM NOM … This was beautifully presented and tasted as good 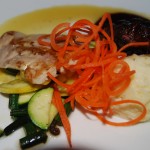 as it looked. Big Island grass fed filet mignon: Gorgonzola, shiitake wonton, basalmic demi, fingerling potatoes, island stir-fry with fresh Hebi …. are you drooling yet? I had to opt out from having dessert, I just had no room at all, but I did get to watch as everyone else enjoyed their Caramel Brownie : Dark brown sugar brownie, vanilla ice cream, caramel, Sea salt, black sesame brittle And from the looks on their faces and the sounds they were making, I was sure missing out! Eddie’s makes some potent Maitais too.

If you get to the Big Island and are looking for a gourmet meal, in a beautiful setting and would also like to learn some history about a local hero, then Eddie Aikau Restaurant & Surf Museum is the place to go! Throughout the interior of the restaurant there are

museum pieces that you can enjoy…also, don’t be shy to ask questions, the staff is fabulous and will take the time to answer them for you. They are very friendly and make you feel right at home. Here is a photo of part of the lake view we had as we sat outside for our memorable meal….take my word, you will love this place!